Why should we pay attention to the Maintenance of Sanitary Valves?

Sanitary valve is a kind of high alloy steel valve which can resist corrosion in air or chemical corrosive medium. It has a beautiful surface and corrosion resistance, and it can give full play to the inherent surface performance of sanitary valves without going through the plating color and other surface treatment.

When maintaining sanitary valves, attention should be paid to the problem of water inlet in the electric head and its drive mechanism, especially in the rainy season, and the first reason is to make the drive mechanism or drive shaft sleeve rust, the second is the winter freeze. Rust will cause too much torque in the operation of the electric valve, and the damaged drive parts will make it impossible for the motor to operate without load or over-torque protection. Manual operation cannot be switched on after the overtorque protection, and the internal alloy parts will be damaged if forced operation. 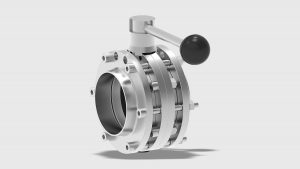 Due to the lack of concepts and equipment for hygienic valve overhaul, only nuclear power plants in many countries can basically repair all valves during each downtime. When the valve is damaged, it is a kind of unmaintainable maintenance, which is very bad for the safe operation of the whole set of equipment and the service life of the valve, and the potential risk of which for an emergency shutdown is high and the resulting damage is huge.

In the absence of maintenance, sanitary valves are often seriously damaged once they leak, which not only increases the difficulty of repair but also often has lost the possibility and value of repair. For the well-organized and well-managed valve repair work, it is not only required that the person concerned should have the corresponding awareness, but also more important to have preventive and maintenance measures. Periodic inspection of the valve is necessary, such as checking the sealing of the valve relative to the outside world and the sealing of the valve in the closed state. The key to preventive valve repair is to repair the valve immediately after the first leak is found, and it is because that the circulating medium can cause the large area of damage of the sealing surface in a short period of time even in the case of the extremely small damage of the sealing surface, resulting in high maintenance costs.

How to prevent Valves from Corrosion?