How Do Sanitary Ball Valves Work?

Ball valves require only 90 degrees of rotation and very little torque to close tightly. The completely equal body cavity provides low resistance, and a straight flow path for the media.

The sanitary ball valve is generally considered to be best suited for direct opening and closing, but recent developments have designed the ball valve to throttle and control flow. The main feature of the ball valve is its own compact structure, easy to operate and maintain, for general working media such as water, solvents, acids, and natural gas, but also for harsh working conditions, such as oxygen, hydrogen peroxide, methane, and ethylene. The ball valve body can be integral or combined. 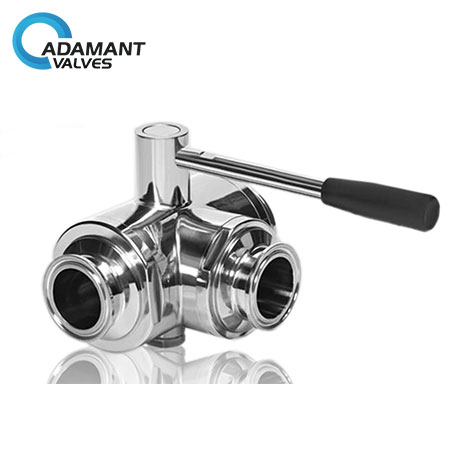 What is a Ball Valve Used For?

The ball valve was introduced in the 1950s, with the rapid development of science and technology, production processes and product structure continue to improve, and in a short period of 40 years, has rapidly developed into a major type of valve.

Ball valves are widely used in petroleum refining, long-distance pipelines, chemical, paper, pharmaceutical, water conservancy, electric power, municipal, steel and other industries, occupying a pivotal position in the national economy. It has the action of rotating 90 degrees, the plug body is a sphere, with a circular hole or channel through its axis.

The ball valve in the pipeline is mainly used to do cut-off, distribution, and change the flow direction of the medium, it only needs to use the operation of 90 degrees of rotation and a very small turning torque to close tight. The ball valve is most suitable for use as a switch and cut-off valve, a V-ball valve. The electric valve should pay attention to the pipeline parameters, but also should pay special attention to the environmental conditions of its use, because the electric device in the electric valve is an electromechanical device, the use of its state is greatly affected by its use of the environment. Normally, electric ball valves and butterfly valves should be used in the following environment with special attention.

How Many Types of Ball Valves are There?

How to Select a Correct Ball Valve?

2, For the transmission pipeline and storage equipment of oil products, and the choice of flange connection ball valve.

3, For city gas and natural gas pipelines, the choice of flange connection, and internal thread connection of the floating ball valve.

4, For metallurgical systems in the oxygen pipeline system, it is appropriate to use a strict degreasing process, and flange connection of the fixed ball valve.

6, For refining units of the catalytic cracking device piping system, can be used to lift the lever ball valve.

7, For chemical systems, such as acid and alkali corrosive media devices and piping systems, it is appropriate to use austenitic stainless steel manufacturing and polytetrafluoroethylene seat seal for the full stainless steel ball valve.

9, For the need for flow adjustment, can be used worm gear drive, pneumatic or electric with a V-shaped opening adjustment ball valve.

How to Maintain Sanitary Ball Valves?

What are the care safety precautions when working on a ball valve?

(1) The pressure must be removed from the upstream and downstream pipelines of the ball valve before disassembly.

(2) Non-metallic parts should be removed from the cleaning agent immediately after cleaning, not long soaking.

(3) assembly flange bolts must be symmetrical, gradually, and evenly tightened.

(4) cleaning agent should be compatible with the rubber parts, plastic parts, metal parts, and working medium (such as gas) in the ball valve. When the working medium is gas, gasoline (GB484-89) can be used to clean metal parts. Non-metal parts with pure water or alcohol cleaning.

(5) decomposition down each single ball valve part can be cleaned by immersion. Still have not decomposed down the metal parts of the non-metal parts can be clean and fine impregnated with cleaning agent silk cloth (to avoid fiber off adhering to the parts) scrubbing. Cleaning must remove all adhering to the wall of grease, dirt, glue, dust, etc.

(6) ball valve decomposition and reassembly must be careful to prevent damage to the sealing surface of the parts, especially non-metallic parts, take out the O-ring should use special tools.

(7) cleaning to be washed after the wall cleaning agent evaporates (available, not soaked cleaning agent silk cloth wipe) for assembly, but shall not be set aside for a long time, otherwise, it will rust, contaminated by dust.

(8) new parts in the assembly before they need to clean.

(10) assembly should not allow metal debris, fibers, grease (except for the use of provisions) dust and other impurities, foreign objects, and other contamination, adhesion or stay on the surface of the parts or into the inner cavity.

What Would Cause a Ball Valve to Leak?

(1) the causes of internal leakage of the ball valve

a. transport and lifting improperly caused by the overall damage to the valve thus causing internal leakage of the valve;

b. factory, after playing water pressure is not dry treatment and anti-corrosion treatment of the valve, resulting in sealing surface rust formation of internal leakage;

c. construction site protection is not in place, the valve is not installed at both ends of the blind, rain, sand, and other impurities into the valve seat, resulting in leakage;

d. Installation, no grease injection to the valve seat, resulting in impurities into the back of the seat, or welding burns caused by internal leakage;

f.Welding slag and other construction leftovers cause scratches on the sealing surface;

g. factory or installation time limit inaccuracy caused by leakage, if the valve stem drive sleeve or other accessories and its assembly angle misalignment, the valve will leak.

2) The causes of internal leakage of the valve during operation.

a. The most common reason is that the operating manager does not maintain the valve considering the more expensive maintenance costs, or the lack of scientific valve management and maintenance approach to the valve does not carry out preventive maintenance, resulting in early failure of equipment;

b. Improper operation or maintenance procedures are not followed to cause internal leakage;

d. Inside leakage caused by damage to the sealing surface due to improper pipe cleaning;

e. Long-term non-maintenance or inactivity of the valve, causing the seat and ball to die, resulting in sealing damage when the valve is opened and closed to form internal leakage;

f. valve switch is not in place to cause internal leakage, any ball valve regardless of the opening and closing position, generally tilted 2 ° ~ 3 ° may cause leakage;

g. many large diameter ball valves mostly have a stem stop block, if used for a long time, due to rust and other reasons between the stem and stem stop block will accumulate rust, dust, paint, and other debris, this debris will cause the valve can not rotate in place and cause leakage – if the valve is buried, lengthening the stem will produce and fall more rust and debris preventing the valve ball from rotating into place and causing the valve to leak.

l. The general actuator is also limited, if long-term rust, hardened grease, or loose limit bolts will make the limit inaccurate and cause internal leakage;

②Inject a certain amount of grease first to see if it can stop the leakage, the injection speed must be slow, while observing the change of the exit pressure gauge pointer to determine the internal leakage of the valve.

③If the leakage cannot be stopped, it is possible that the sealing grease injected in the early stage has become hard or the sealing surface is damaged, causing internal leakage. It is recommended to inject a valve cleaning solution at this time to clean the sealing surface of the valve as well as the valve seat. Usually soak for at least half an hour, if necessary for several hours or even days, and then do the next step after all the cured material is dissolved. It is best to open and close the movable valve several times during this process.

④Reinject grease, intermittently open and close the valve to discharge impurities from the back cavity of the valve seat and the sealing surface.

⑤ Check at full shut-off position, if there is still leakage, inject reinforced seal grease and open the valve cavity for venting at the same time, which can generate a large pressure difference and help seal, generally, internal leakage can be eliminated by injecting reinforced seal grease.

⑥If there is still internal leakage, the valve should be repaired or replaced. 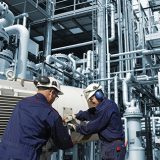 What Does a Hassle-free Sanitary Ball Valve Look Like?

Why Are Sanitary Ball Valves Competitive?