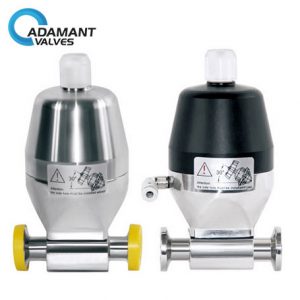 What is a sanitary diaphragm valve?

A sanitary diaphragm valve is considered a highly hygienic valve due to its mode of operation. This technique is called “input from above.” The upper inlet facilitates the welding and the extraction of the clamps during the maintenance of the valve. Sanitary diaphragm valves are the preferred choice of valves used in the pharmaceutical industry.

What are the features of a sanitary diaphragm valve?

Sanitary pneumatic diaphragm valve consists of sanitary diaphragm valve and pneumatic actuator. It uses the compressed air as the driving force to regulate the flow of fluid medium in the pipeline. Since valve body that has a corrosion-resistant lining and diaphragm that is corrosion-resistant are used in the structure, and there’s no stuffing structure, the throttle element is elastic diaphragm, the flow channel of the valve body is smooth, pneumatic diaphragm valve has the advantages of small resistance, large flow, no leakage, convenience and reliability, fire-and explosion-proof. It’s widely used for flow regulation in industrial automation systems that contain strong acid, strong alkali, strong corrosion, high viscosity, glumes, fiber, and toxic media.

Why Are Sanitary Diaphragm Valves Stable?

The advantage of the sanitary diaphragm valve is that its control mechanism is separated from the medium path, which not only ensures the purity of the working medium but also prevents the possibility of the medium in the pipeline hitting the working part of the control mechanism. In addition, there is no need for any form of separate sealing at the stem, unless it is used as a safety device in controlling hazardous media for hygienic diaphragm valves. In the diaphragm valve, as the working medium only contacts the diaphragm and body, both of which can use a variety of different materials, so the valve is ideal for controlling a variety of working media, especially those with chemical corrosion or suspended particles.

What are the applications of sanitary diaphragm valve?

Sanitary diaphragm valves are used in many industries to control fluid, solid, gas and other media, and their control function is to make cutoff and connection flexibly. It is applicable to water heating, food, medicine, and other industries, as well as petroleum and metallurgy, and other highly corrosive industries.

What are the Characteristics of Sanitary Diaphragm Valves?

Flexible operation
In addition, there is no need for any form of separate sealing at the stem unless used as a safety device in controlling hazardous media. In the diaphragm valve, the working medium only comes into contact with the diaphragm and the body, both of which can be made of a variety of different materials, so the valve is ideal for controlling a variety of working media, especially those with chemically aggressive or suspended particles. The working temperature of the sanitary diaphragm valve is usually limited by the diaphragm and body lining material used, its working temperature range is about – 50 ~ 175 ℃.

Simple structure
The diaphragm valve can be controlled freely in different media. Water, liquid, gas, all kinds of stamp products can be used to cut off and connect, and there will be no leakage. The actuator for the diaphragm valve is simple and can be operated remotely or manually, and different media can be controlled by pressing the rubber film directly onto the seat using the stem. Moreover, it has many connection modes and is very flexible in operation, which includes quick release flange connection, welding connection, and movable flange connection.

How to Maintain the Sanitary Diaphragm Valve Properly?

*Sanitary diaphragm valves should be sent to drab ventilated rooms and should not be stacked;
*It is necessary to seal both ends of the channel of the inventory diaphragm valve to prevent foreign matter from entering the inner cavity and damaging the sealing parts;
*The metal working surface of the diaphragm valve should be removed dirt and coated with anti-rust oil, and grease should be often lubricated in the oil cup;
*Do not brush grease on the outside of the liner or rubber diaphragm to avoid the occurrence of rubber swelling and affect the service life of the valve;
*The handwheel should be rotated counterclockwise during storage or discontinuation to keep the valve in a slightly opened state to prevent the diaphragm from losing its elasticity due to prolonged pressure;
*During transportation or installation, the sling shall not be tied to the handwheel or stem and shall not collide with other metal or hard objects to avoid damaging parts and linings;
*The operating conditions and media of the pipeline should be carefully checked before installation to ensure that the valve is suitable for the scope of application, so as to avoid unnecessary loss or even accidental accidents caused by improper selection;
*The inner chamber of the valve body shall be cleaned before installation to avoid fouling jam or damage to the sealing parts, and check whether all the connecting bolts of the parts are properly fastened;
*It is necessary to frequently view the parts touched with the media during operation and replace the vulnerable parts regularly according to the practical use;
*Be careful not to tighten or loosen the diaphragm too tightly when replacing it;
*When manually operating the diaphragm valve, the valve shall not be opened or closed by means of the auxiliary lever, so as to avoid excessive torque and damage to the driving parts or sealing parts;
*After maintenance, the diaphragm valve should be tested according to the relevant test rules before it can be installed.