Flange check valve and the cut-off valve is not the same thing, the main differences between the two in the structure is very large. Check valve, is a one-way valve, automatically prevent the reverse flow of fluid, no knob, can not artificially block the forward flow.

The cut-off valve, a knob, can be artificially controlled forward flow, due to its special structure, even if there are no man-made pipe valves, the fluid can not reverse flow. Check valve, also known as counter-current valve,  back pressure valve. Such valves rely on the flow of the medium itself in the pipeline to automatically open and close the force, is an automatic valve.

This type of sanitary shut off valve works by allowing only the medium to flow in one direction and to prevent directional flow. Usually, the valve is automatically working, in a direction of fluid pressure, the valve flap open; the reverse flow of fluid by the fluid pressure and the valve flap valve self-acting on the seat, which cut off the flow. Its main role is to prevent the media back to prevent the pump and drive motor reversal, and the container media release. According to the structure can be divided into floating, fixed, flexible and oil seal four kinds of the check valve; according to the channel can be divided into direct type, angle type, and three-way type.

Three-way valves can be divided into T-shaped and L-shaped; according to the connection can be divided into threaded connection, flange connection and welded three. The same thing, different names, identification is completed. The price is different, may be due to specifications, materials, performance and other differences caused. Sanitary check valve is to rely on the flow of the media itself and automatically open and close the valve flap, used to prevent the media back valve, also known as a check valve, a countercurrent valve, and back pressure valve. The check valve is an automatic valve, its main role is to prevent the media back, to prevent the pump and drive motor reverse, and the container media release. The check valve may also be used on a line in which the supply pressure of the auxiliary system may be increased beyond the system pressure.

Structure features of Axial flow check valve
1, open and close quickly: axial flow check valve flap stroke is short, streamlined structural design of the resistance is small, can achieve rapid closure;
2, no noise: the valve opening and closing in a dynamic balance system, the valve running balance, close the instantaneous flow rate is small, the spring reset makes the valve open and close without impact, reducing noise and water hammer effect;
3, excellent sealing performance: the quality of the valve flap lighter, lightweight, low inertia of the valve after a short stroke after the closure of the impact of the valve seat is small, can effectively reduce the valve seat sealing surface damage caused by leakage;
4, the operation of low energy consumption: flow through the axial flow of the check valve to overcome the spring force can only open the valve all the required critical flow rate is much smaller than the Swing check valve required critical flow rate, Fully guarantee the flow area under the premise of the maximum operating energy consumption can be reduced.
5, the fluid resistance: axial flow structure and flow surface streamlined flow channel to ensure that the fluid in a laminar flow state, making the valve flow resistance coefficient is small, saving energy;
6, the installation is simple, and the same size compared to other forms of check valves, axial flow check valve length is short, lightweight, the installation location is small, horizontal, vertical and any angle installation. 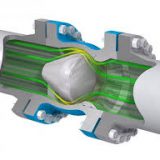 The Testing Principle and Procedure of Sanitary Check Valve

How to Classify Valve Connection Forms

The Use of Vacuum Pressure Relief Valve