A Brief Introduction to the Classification of Direction Control Valve

In actual applications, based on different needs, direction control valve can be divided into different categories: 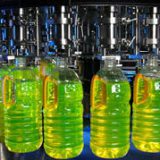